Earlier this week, I had the privilege of delivering a guest lecture on Business Intelligence for

Professor Malone’s graduate “IT Essentials” class at MIT Sloan. The experience brought back fond memories from when I taught back in the early 1980s.

Most in the class already had some real-world business experience. As a result, there were a number of excellent and insightful questions.

Here are a few of the questions (paraphrased), with my responses:

Q: How do you create and sustain an “information democracy” in a startup venture?

A: First, you need to plan as though your “startup” will someday become a large enterprise. Decisions made today will either help or haunt you well into the future. So, with that in mind, at the top of the list are transparency and the open sharing of knowledge and insight. By nature humans are hoarders and prefer to withhold information for their own benefit. That’s why it’s nearly impossible to change the culture of a large organization where “in-transparency” has been the norm. Of course, it’s easy to put transparency in the mission statement and ignore it. However, to be truly successful, one must “live” transparency. This means encouraging and incenting the sharing of information – especially if it exposes problems!

It’s also useful to look at the dysfunction surrounding BI implementations in large organizations today: disparate applications and data, conflicting business semantics, multiple master files, and a multitude of user tools (including spreadsheets!) – have created pockets of BI automation and what I call information “myopia”. These problems can be minimized if you start out with the notion of an enterprise data model and build (or implement) enterprise applications that are fully integrated and which are equally well designed to analyze the data which they process and store. Although data warehousing will still be necessary, its creation and maintenance will be substantially easier.

Q; How do you balance data quality shortcomings and urgent user demands for access to information?

A: Data quality and integration are areas where getting it “right” is critical. It’s expensive, takes lots of time and energy (and skill) - but is hard to readily demonstrate value to business management. In contrast, users are easily excited by fancy BI tools with cool visualizations. And, with innumerable tools available for purchase and download over the internet – users are buying them and loading them with report extracts, spreadsheet data, etc. and making decisions based on incomplete or erroneous information.

The solution is to balance urgent end user requests with needed data quality programs. This means doing some things that are expedient: delivering user applications quickly without perfect data quality. As a part of this, users must understand the limitations and that the reliability and utility of these applications will eventually improve as a result of strategic data quality programs. One of the best ways to achieve this is through the creation of a BI competency center –whose charter it is to document and implement best practices for BI.

Q: Can organizations use the tools they have or do they have to buy new ones to succeed with BI?

A: It turns that that success with BI has much less to do with the tools than the people using them. I’ve seen some BI successes that employed very modest technology and some colossal failures that had all the technological bells and whistles. That’s why much of my book focuses upon the human and organizational issues that determine the success of BI initiatives. These include management vision and commitment, organizational alignment, culture, and skills. Although buying “yet-another-tool” is easier than solving these problems, it ultimately makes things worse.

Posted by Howard Dresner at 1:41 PM No comments:

Last week, at the Gartner conference, I was asked several times for good books and other sources of information on Business Intelligence and Performance Management.

Here are some books from authors on the subject that I respect:

- Freakonomics : A Rogue Economist Explores the Hidden Side of Everything by Steven D. Levitt , Stephen J. Dubner

- Super Crunchers: Why Thinking-by-Numbers Is the New Way to Be Smart by Ian Ayres

and, of course my own book:

- "The Performance Management Revolution: Business Results Through Insight and Action" by Howard Dresner

And, here are a few of good blogs:

And, some good on-line mags:

Posted by Howard Dresner at 8:51 AM 2 comments:

I’m just back from Gartner’s BI conference in Chicago and I feel energized. First of all, let me mention that I f 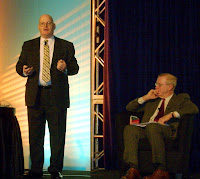 ounded this very conference in 2003 and chaired it until I left Gartner in 2005. So, I was honored and delighted to be invited back to deliver a keynote on Thursday with “Mr. Balanced Scorecard” himself, Dr. David P. Norton, in addition to presenting at a “power breakfast” and a doing a book signing.

I was impressed with how the conference has grown since 2005. With over 1,200 attendees and more than 50 vendors on the show floor – it is the biggest vendor-neutral BI/EPM show in the world. When we started the conference in 2003, it was at the Sheraton in Chicago. After three years – and growing from 400 attendees to 800, it moved to the Hyatt. Now at 1,200 attendees, Gartner will be moving it to the Gaylord National Resort & Convention Center, in Maryland, for 2009.

Unlike when I was chairing the conference, I had plenty of time to talk to people and even attend some sessions. Here are some of the things that I observed:

Even though many of the sessions were designated “advanced sessions”, most attendees were first timers and were there to begin learning about business intelligence, data warehous 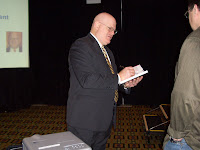 ing and performance management. This confirms my belief that, while vendors consolidate and make for a more mature supplier market, user adoption and penetration is still in its infancy. Absent a real BI strategy, these organizations are rife with the misuse of spreadsheets and other personal productivity tools. To cater to them, Gartner offered tutorials and even some workshops this year.

Eighty percent (or more) of the attendees came from IT departments. The rest (presumably) were business users. Gartner has been trying to encourage its traditional following to bring a user “buddy” with them by offering discounts. Having said this, much of the content was oriented towards IT, not business. Among the most popular sessions: data warehousing and master data management – i.e., the “plumbing of BI”.

Some of the attendees that I spoke with felt frustrated by their inability to take what they learned and change the status quo of their organizations. This is nothing new and underscores the fact that success with BI and EPM requires much more than architecture and technology. In fact, while it might be easier to buy yet-another-tool, it is often the wrong approach. Change requires vision and leadership at the highest levels of the organization. Those who have read my book, The Performance Management Revolution (John Wiley & Sons), know that I have focused predominately upon organization, culture, politics and method as the obstacles or enablers of “information democracy”.

Others attendees were sent with a real mandate to supply better information to management. Here I see the potential to change management’s perception of BI and EPM. However, shifting from a tactical request for better information to a performance-driven culture is fraught with risks and challenges. Working with Finance and establishing a competency center outside of IT can help. Gartner had at least two sessions on competency centers. The one I went to was extremely well attended. However, at my “power breakfast” I surveyed the audience and found that only a small minority of them had a competency center in place.

With some of the changing market dynamics, I was pleased to see sessions on “open source” BI and DW and software-as-a-service (SaaS). However, to my great surprise, when polled during the MQ Power Session, none of the attendees indicated that they were using any open source products for DW, DI or BI. A few seemed to be exploring SaaS. Perhaps those were the few business users, as most IT folk view SaaS as a problem. And, while the “mega vendors” (e.g., IBM, Microsoft, Oracle, SAP) were often mentioned, I found no in-depth or critical discussion of their offerings, strategies or relative merits.

All-in-all, it was a great conference which was very well received by attendees and vendors alike. And, given the imperative by management to improve decision making and access to information, I suspect that 2009 will see continued strong demand – with the indoctrination of the next crop of “newbies” to DW, DI, BI and EPM.

And, don't forget to check out my website for details on articles, speaking engagements, presentation abstracts, my book and more!